This is more appropriate when the elections will heat up, but I re-discovered it today, so I am posting it now.


Rough translation, "There is so much truth in the eyes of political whores." Y. Shevchuk
Posted by SubWife at 9:18 PM No comments: Links to this post

Email ThisBlogThis!Share to TwitterShare to FacebookShare to Pinterest
Labels: politics, quote of the month

Remember how I was gushing in the not so distant past about finally finding movies hubby and I both enjoyed? Yeah, scratch that. Turns out that after seven years of marriage, I still haven't learned how to interpret certain words, phrases and body language of my significant other. I mistook his hearty laughing for, you know, enjoying a comedy. How could I? But I feel it was an honest mistake anyone could have made, well, anyone married to SubHub that it.

When the initial shock - and I am hardly exaggerating - wore off, I had asked him what exactly was wrong. Turns out, nothing in particular. He was just "disappointed". I pressed for details, but alas, couldn't squeeze much more than I already did. Hence, I am left to guess. Was it the lack of depth in acting? Could the actors not convey the deep and conflicting feeling of their characters the way Pluto did when he was stripped of his "planet" status? Or was the plot not as intriguing as the M Theory? The suspense is just killing me. And if I wasn't able to tell a difference between him liking and disliking comedy, is it possible I had misread some other things? (Insert an obligatory joke about SubHub regularly faking it because I won't make it as a sacrifice on the altar of marital harmony...)

And now instead of hope in finding common entertainment, my heart is heavy with invisible and unproven black matter. Yes, we've been watching "Universe" again, how did you guess?
Posted by SubWife at 1:52 AM 2 comments: Links to this post

DD burned her hand yesterday. Nothing major, but definitely not pleasant. She didn't even cry, and now I know why. She was nursing an evil plan in her cute little head.

DD: Mom, could you please write a note to my teacher that I cannot do my reading homework tonight because I burned my hand.
Me (stifling a laugh): But sweetie, you don't read with your hand.
DD: But I need to point!

Evil, I tell you, in Tiger Mom terms. Me? I'm proud, in a way. It was inventive!
Posted by SubWife at 9:14 PM No comments: Links to this post

Email ThisBlogThis!Share to TwitterShare to FacebookShare to Pinterest
Labels: kids do the darnest things, motherhood

It only took seven years of being married to find a bunch of movies that both me and hubby can agree on watching together. There are a few he will compromise and watch with me (You've got mail), there are some I would compromise and watch with him (Independence Day), up until recently we have found only 2 movies both of us could watch without feeling that one of us had to give in - How to Steal a Million (still praying it won't be remade, ever) and Dirty Rotten Scoundrels. Most other times, we end up with "Elegant Universe", "Universe", "Life on Mars", you get the picture. After watching so many of these, I feel like I personally have witnessed the formation of our moon.

A few weeks ago we were looking for a movie for our in-laws, when we stumbled upon a collection of old French comedies. We finally found something we both enjoy! (We are no polyglots, these movies are dubbed in Russian)

So far we have seen three movies. One was pretty good, Les Comperes, one so-so, and the one we saw last night was just great. (I believe it was remade in the US, but so far I haven't seen a single decent remake of a good French comedy. So many of great movies have been completely ruined or just turned into an easy to forget mediocrity.) 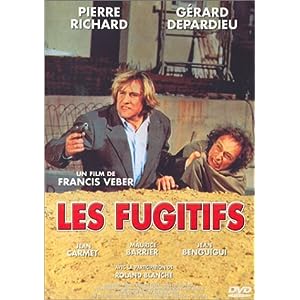 Hubby and I both adored the movie. I highly recommend. And the vet steals every scene he's in.

We better find something else, real soon. Because I have been spoiled now by these movies and the thought of another "universe" movie makes me want to cry.
Posted by SubWife at 9:25 PM 2 comments: Links to this post

Email ThisBlogThis!Share to TwitterShare to FacebookShare to Pinterest
Labels: movies

While DD was out of the house, DS got into her candy stash, almost completely destroying it. Well, it wasn't that big to begin with, but still. Upon DD's return, I informed her of the terrible loss that befell her. DD, a generous and forgiving spirit, had the following conversation with her brother.

DD: DB, you can't take my candy without permission!
DS: I am sorry.
DD: This time I forgive you, but don't ever do anything like this again. (This child starts sounding a lot like her mother. Poor kid.)
DS: Okay. (momentary silence). You got more candy?

No, I don't think he was thinking about asking permission this time either.
Posted by SubWife at 9:20 PM No comments: Links to this post