I am not big on lists, even though I should get into a habit of making them.  I don't think I have ever written down my next year's resolutions, which I mentally make about every other December.  Being as disorganized as I am, half the time I forget to make them in December and end up scrambling first week of January or not doing them at all.  I decided to break away from that habit, and actually document what I wanted to achieve in the coming year.  There were lots of important things, such as paying more attention to the kids, becoming more organized, losing weight, ridding oneself of guilt.  It would include not only the goals, but the important milestones and ways of achieving them.  It would've been a very good list, even if never followed.

Only at some point between thinking about it and writing all of that down, I got re-inspired by The Bloggess.  I started thinking as to what was it that I really wanted in 2012?  And I decided I wanted to feel happy.  Somehow between taking care of my wonderful kids and a new bigger house and work and finances and all things that life threw my way this year, I forgot about being happy.  It somehow slipped away, almost by choice.  And yes, to be happier I need to become more organized, lose weight and feel that I am a better mother than I am now; I know that it won't happen by itself.  But the main focus should not be on the steps to happiness, but on happiness itself. And if it requires not only taking care of big stuff, but doing silly things that brighten up the day?  Well, I am up for that challenge!

I will try my best to silence the voices telling me that once one declares the intent of being happy, all kinds of hell breaks loose.  Because I need to be happy, and if I don't try, I never will be.

Therefore, there is only one resolution on my list this year:  2012 should be the year of being

Wishing everyone happy, no, furiously happy and healthy 2012!

And if you never read Bloggess, I suggest adding this to your list of resolutions! 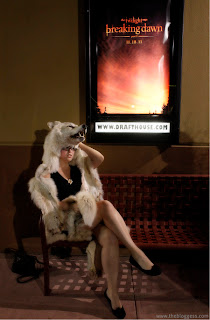 (Jenny Lawson, The Bloggess, being furiously happy, which could be hard to see because she is wearing a wolf. But she is, trust me.)

Don't be shy! Leave your sub-comment!